Hey Wendy’s – About My Coffee…

Posted by Frankly Francis on April 26, 2010 under Personal |

Sometimes I can be a curmudgeon, and sometimes I am proud of that.

I’m waiting in the drive-thru lane, I’m still waiting, I can see myself aging, pigs are flying above my car, Hell is freezing over.  OK, I’m overplaying it, but it seems like an undue amount of time.  And all I want is a black coffee.

I’ve long maintained that the propensity to get “order screwed” in the drive-thru lane is the price that one pays for convenience, but I can’t even get up there to place my order.

Finally, I’m at the window.  The young lady rejects my money and hands me my coffee.  She says that it’s on the house for the wait.  I offer to pay again, but she insists that the manager insists.

Why Thank You, Wendy’s…I’ll be back again.

What a unique experience.  One that I’ve never had before at fast food: understanding of the customer and the desire to mitigate the delay.

Imagine that, it’s almost like they think my time might be valuable.  I’ve had that notion before, but it is affirming when others feel that way as well.

I’d like to think that I’m easy to please, that I’m as understanding and forgiving as the next guy, but I’ve seen the next guy in action on many occasions and it hasn’t been pretty.  And I have had my moments too.

I don’t mean to take my pleasant surprise over the top.  I know it was just a coffee, but it is a response worth noting nonetheless.

Posted by Frankly Francis on April 23, 2010 under Books/Authors, Social Issues/Politics |

Not to exclude Rose Friedman, but…

Here’s my take: Milton Friedman valued our individuality.  He felt that the collective acts of individuals pursuing their own interests would provide much more, in terms personal satisfaction and economic resources than the results of individuals acting in a collective.  It follows then, his basic tenet that without economic freedom, there cannot be political freedom.

The fusion of economic and political freedom becomes the optimum result.  Note, Friedman was much too realistic to advocate utopia – he certainly knew that there was no perfection in any approach, but held firmly to the value of recognizing each individual life as having a value that exceeded that of the state.  Frankly Francis says: True That!

A few thoughts directly from Friedman: 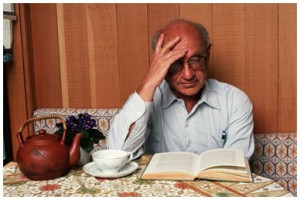 “I say thank God for government waste. If government is doing bad things, it’s only the waste that prevents the harm from being greater”

Here’s a quote about Friedman by George Schultz that I think is worth aspiring to – “Everyone loves to argue with Milton, particularly when he isn’t there.”

Milton was philosophically a libertarian.  Politically, he was a Republican, but that, he explained was for expediency, perhaps much the same as Congressman Ron Paul.

During his lifetime he was recognized with the John Bates Clark Medal (1951), the Nobel Memorial Prize in Economics (1976), and in 1988, both the Presidential Medal of Freedom and the National Medal of Science.  Big Stuff!

I must say that as reading Ayn Rand’s “Atlas Shrugged” strengthened my existing perceptions, reading Freidman solidified my existing beliefs.

It is distinctly your own unique and wonderful life – Do yourself a real favor and read this book.