Posted by Frankly Francis on July 1, 2010 under Personal |

So last weekend was spent going to a couple of graduation parties.  Lots of fun, good to see people, proud of the graduates.  Got me a little reflective…

I have never attended one of my own graduations.  I intend to keep it that way.  Pomp & Circumstance does have its place amongst us and I respect that for others.

I had what you might call a less than wholesome attitude in high school.  I wanted to live.  I wanted to experience things.  And authority and rules were needlessly restrictive.

You know what it was about?  It was playing in a rock-n-roll band and enjoying to the fullest all that went along with that.  I never got caught up in school spirit.  I was doing time when it came to that place…

Hence, I decided to my skip my graduation.  I took a nap during its scheduled time.  Never regretted it.

Fast forward a couple of decades.  Number Two daughter (I refer to my children by their birth order rather than by their names) was graduating from the very same high school.  It meant that I had to go to the graduation ceremony.  I really did want to attend her graduation, but I still wasn’t too keen on being back at my old alma mater.

Grad ceremony time and, well, I’m getting though it just fine.   As she stepped up to the podium, I noticed that the Valedictorian had colored a rainbow on her headgear.

She took a moment to make the standard acknowledgements and opening remarks.

She then launched into a searing harangue about how mean and awful her fellow classmates were to her and to each other.  Accusations of cliques and cruelty shot from her lips like bullets from an AK-47.

She was clearly deviating from her pre-approved speech.  The school board members and faculty were squirming in their chairs behind her.

Then, to my wonder and amazement, she topped it all off by formally outing herself!  Yep, she played that card in front of a full house.  Remember the mention of the rainbow earlier?

Bedlam and anarchy all around me.  Chaos.

Truth being stranger than fiction in front of my eyes.

I was ecstatic!  I think I yelled “You Go Girl!” Frankly Francis sidebar: please place the phrase in the time context that it was delivered in – prior to this millennium.

It was the best graduation I’ve ever witnessed!

However, cinematically, the best commencement address I’ve ever heard was delivered by Rodney Dangerfield in the movie “Back to School.”  It went something like this: 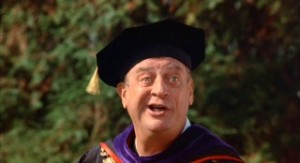 “Thank you, Dean Martin, President Sinclair…and members of the graduating class.  I have only one thing to say to you today…it’s a jungle out there.

You gotta look out for number one.  But don’t step in number two.

And so, to all you graduates…as you go out into the world my advice to you is…don’t go!  It’s rough out there.  Move back with your parents.  Let them worry about it.”

That pretty much calls it the way it is.